In this section, we'll read and respond to a wide range of poetry to get us into a literary mindset before starting our own writing.

Directions:
Read the daily poem to yourself. If there is an audio file, you may listen instead (use headphones). Respond to the prompts in your notebook and be prepared to share.

_Today's poems, Birchand Shelter, come from one of my favorite anthologies of poetry: Unleashed: Poems by Writers' Dogs. The editors of the collection asked a bunch of dog-owning poets to write poems as if they were their own dogs. the results are funny, thought-provoking, and moving.

-- Karen Shepard
Response:
Look at the poem, Shelter, by R.S. Jones. This is such a yearning poem. Record the lines where you get the sense of just how much this dog is yearning to be owned. 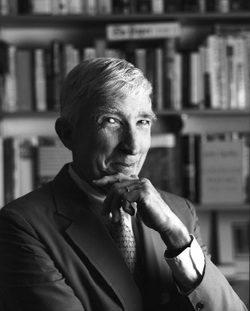 _Some of the saddest poems are about the deaths of our pets. We feel so helpless to offer comfort or relief when our animals suffer. In this haunting poem, John Updike tells the story of a puppy that couldn't tell her people that something was wrong.

Dog's Death
She must have been kicked unseen or brushed by a car.
Too young to know much, she was beginning to learn
To use the newspapers spread on the kitchen floor
And to win, wetting there, the words, "Good dog! Good dog!"

We thought her shy malaise was a shot reaction.
The autopsy disclosed a rupture in her liver.
As we teased her with play, blood was filling her skin
And her heart was learning to lie down forever.

Monday morning, as the children were noisily fed
And sent to school, she crawled beneath the youngest's bed.
We found her twisted and limp but still alive.
In the car to the vet's, on my lap, she tried

To bite my hand and died. I stroked her warm fur
And my wife called in a voice imperious with tears.
Though surrounded by love that would have upheld her,
Nevertheless she sank and, stiffening, disappeared.

Back home, we found that in the night her frame,
Drawing near to dissolution, had endured the shame
Of diarrhoea and had dragged across the floor
To a newspaper carelessly left there.  Good dog.

Response:
In your notebook, write down the lines and language that touched your heart. Explain what it was about Updike's language that moved you: it might be a personal connection, a mental image, etc. 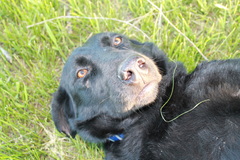 _Today's poem considers the essential nature of our domestic pets. We tend to give our dogs our feelings and needs and reactions, but underneath, our dogs are beasts. Mary Oliver, an American poet, reminds us of the genealogy of our dogs - and that deep down, they're still beasts.

Over
the wide field

at his flanks,
at his heels,

my own two darlings
among them

lunging and buckling
with desire

as they leaped
for the throat

as they tried
and tried again

to bring him down.
At the lake

I could hear
the green wind

of his breath
tearing

but the long legs
never stopped

till he clambered
up the far shore.

The dogs
moaned and screeched

they flung themselves
on the grass

It took hours
but finally

in the half-drowned light
in the silence

of the summer evening
they woke

from fitful naps,
they stepped

in their old good natures
toward us

look look
into their eyes

bright as planets
under the long lashes

here is such shyness such courage!
here is the shining rudimentary soul

here is hope retching, the world as it is
here is the black the red the bottomless pool.

Response:
In your notebook, record the lines that your think are the most important, and explain why you think they're critical to understanding the poem. 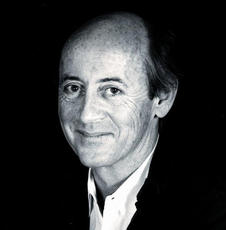 Billy Collins is a former poet laureate of the United States. His poem, Dharma, is about his dog, but "dharma" isn't the name of his dog. "Dharma" is a Sanskrit word that means someone's essential spiritual state. Collins once said that this poem was an attempt to investigate the spiritual possibilities of his dog.

The way the dog trots out the front door
every morning
without a hat or an umbrella,
without any money
or the keys to her dog house
never fails to fill the saucer of my heart
with milky admiration.

Who provides a finer example
of a life without encumbrance--
Thoreau in his curtainless hut
with a single plate, a single spoon?
Ghandi with his staff and his holy diapers?

Off she goes into the material world
with nothing but her brown coat
and her modest blue collar,
following only her wet nose,
the twin portals of her steady breathing,
followed only by the plume of her tail.

If only she did not shove the cat aside
every morning
and eat all his food
what a model of self-containment she would be,
what a paragon of earthly detachment.
If only she were not so eager
for a rub behind the ears,
so acrobatic in her welcomes,
if only I were not her god.

Response:
In your notebook, please record 2 or 3 lines that you really liked from the poem. Then, write a sentence or two explaining why you liked them. 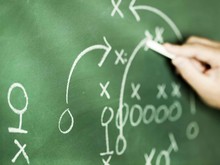 Simile: A comparison between two things using like or as.


Metaphor: A comparison between two things that does NOT use like or as.
Example: His car was a dinosaur.

In this poem, Edward Hirsch tells us about a great high school football coach – his old coach – and the man’s favorite word, execution, by which the coach means, to accomplish a play according to the plan. But execution has other meanings, too.

The last time I saw my high school football coach
He had cancer stenciled into his face
Like pencil marks from the sun, like intricate
Drawings on the chalkboard, small x's and o's
That he copied down in a neat numerical hand
Before practice in the morning. By day's end
The board was a spiderweb of options and counters,
Blasts and sweeps, a constellation of players
Shining under his favorite word, Execution,
Underlined in the upper right-hand corner of things.
He believed in football like a new religion
And had perfect unquestioning faith in the fundamentals
Of blocking and tackling, the idea of warfare
Without suffering or death, the concept of teammates
Moving in harmony like the planets — and yet
Our awkward adolescent bodies were always canceling
The flawless beauty of Saturday afternoons in September,
Falling away from the particular grace of autumn,
The clear weather, the ideal game he imagined.
And so he drove us through punishing drills
On weekday afternoons, and doubled our practice time,
And challenged us to hammer him with forearms,
And devised elaborate, last-second plays — a flea-
Flicker, a triple reverse — to save us from defeat.
Almost always they worked. He despised losing
And loved winning more than his own body, maybe even
More than himself. But the last time I saw him
He looked wobbly and stunned by illness,
And I remembered the game in my senior year
When we met a downstate team who loved hitting
More than we did, who battered us all afternoon
With a vengeance, who destroyed us with timing
And power, with deadly, impersonal authority,
Machine-like fury, perfect execution.

Response:
Reread the poem. In your notebook record at least TWO examples of similes and/or metaphors used by the poet. 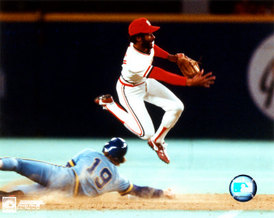 This is one of the greatest poems ever about baseball. It moves on the page like a classic double play: all the action takes place almost at once, and Robert Wallace imitates it with form and language.

In his sea-lit
distance, the pitcher winding
like a clock about to chime comes down with

the ball, hit
sharply, under the artificial
bank of lights, bounds like a vanishing string

pirouettes
leaping, above the slide, to throw
from mid-air, across the colored tightened interval,

stretches. What
is too swift for deception
is final, lost, among the loosened figures

jogging off the field
(the pitcher walks), casual
in the space where the poem has happened.

Response:
Copy three lines that create the strongest visual images. Be prepared to discuss them.

Before sixteen
I was fast
enough to fake
my shadow out
and I could read
every crack and ripple
in that patch of asphalt.
I owned
the slanted rim
knew
the dead spot in the backboard.
Always the ball
came back.

Every day I loved
to sharpen
my shooting eye,
waiting
for the touch.
Set shot, jump shot,
layup, hook-
after a while
I could feel
the ball hunger-
ing to clear
the lip of the rim,
the two of us
falling through.

Response:
Please go back into "First Love" on your own and consider two questions: